Situated at the end of the Avda. Andalucia, next to David Marshalls gallery, this is a cozy yet spacious place for lunch or dinner. The interior has a fireplace for colder nights and on the first floor is a large terrace with spectacular views when evenings are getting warmer.

Run by Jorge, a Brazilian entrepreneur with a passion for food and wine, the staff always makes you feel very welcome.

I can definitely recommend the burger, which is minced at the moment, but you can’t really go wrong with your order.

Jorge is also a huge fan of Spanish wines and sells some of the best value for money wines on the Coast. You might not recognize the brands, as they come from small vineyards, but I can assure that they will all please your palate.

Cozy little restaurant on the main square of Benahavis village, with a large and very comfortable terrace on the square itself. 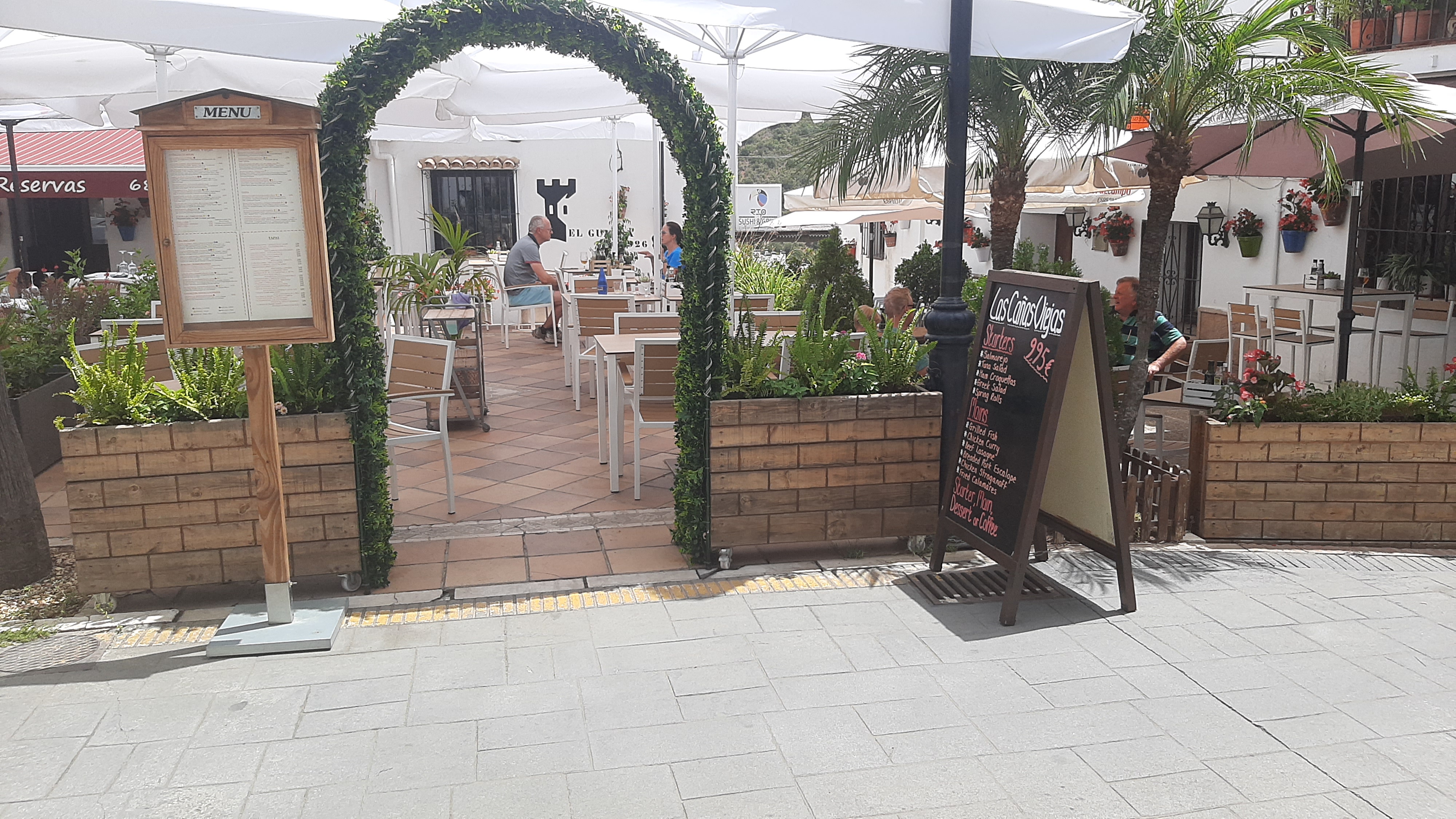 Located on the main square in the village, this bar/restaurant serves breakfast, tapas and lunch and, in summer, also dinner.

Large terrace and ample inside space.

English Roast on sundays from september to june. 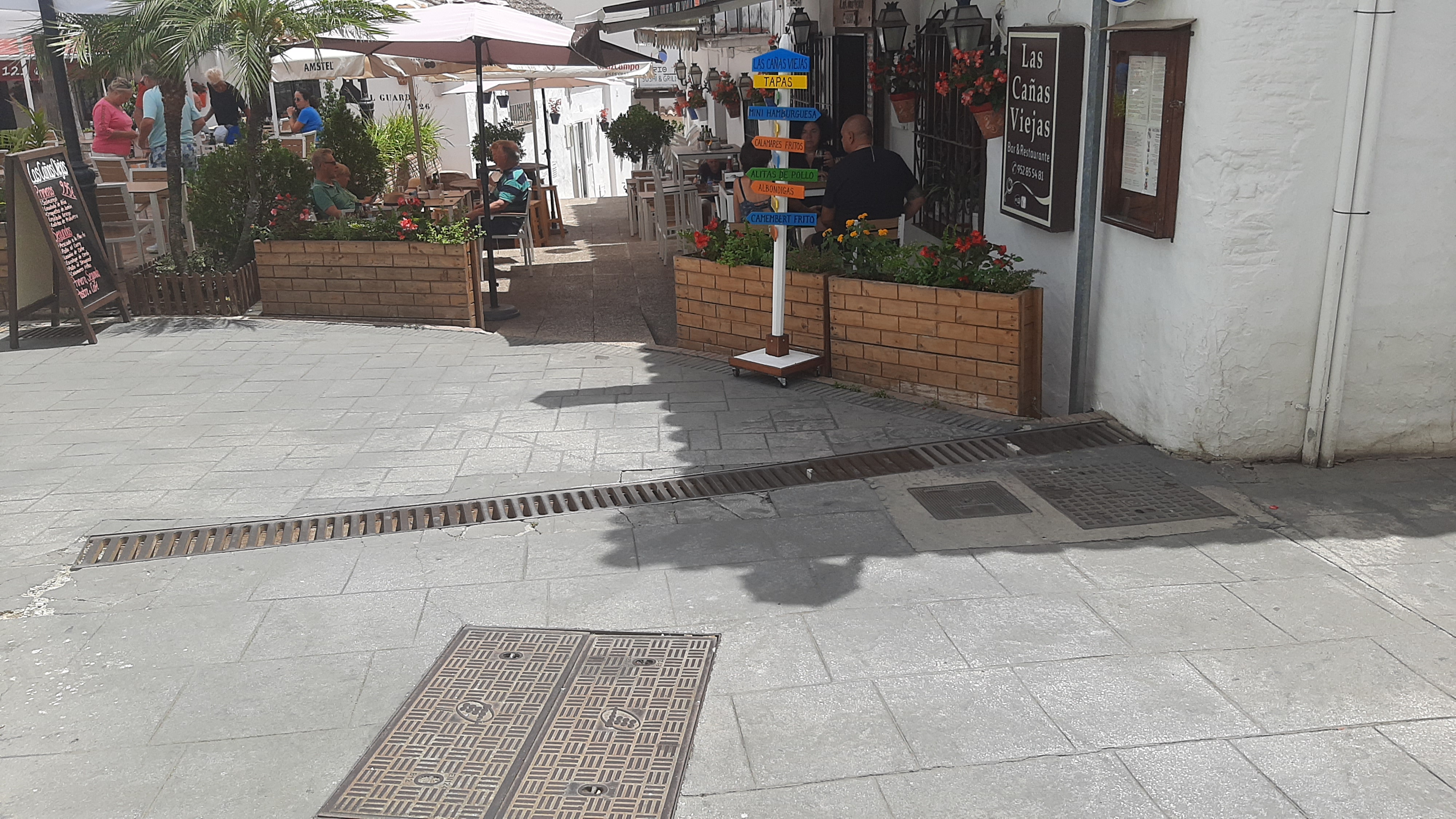 The word tapa comes from the verb tapar, which means to cover. Centuries ago, it used to be a slice of bread which was put on top of a drink to keep out flies and probably dust as well. Then some medieval  and entrepreneurial bar owner had the brilliant idea to put some meat or cheese on the bread and the tapa as we know it was born.

Tapas recipes are according to the taste and gastronomic traditions of each region. But the tapas most often served are usually those including  the many variety of olives, dry nuts, as well as many kinds of cold cuts. Nowadays, the tapa includes many other recipes for appetizers. In the Middle Ages and during periods of economic hardship, those courses were supplemented with bread. However, today, those courses are included in the tapas world. Tapas recipes use a wide variety of animal-derived products, such as meat, fish and eggs and agricultural products such as vegetables.

The many varieties of olives – green, Manzanilla, machacadas (crushed), gordales (big), rellenas (stuffed), aliñadas (flavoured) or deshuesadas (stoneless) – are in themselves the subject of a book. Together with the olives, slices of garlic or smoked-ham sausages, slices of cheese or jamón curado, became famous worldwide. After all, this is the real origin of the cover of the Middle Ages’ jar.
Among others, there are fried tapas and tapas prepared with sauces. Sometime in the past, the fried tapas had more success and are more in demand than the ones prepared with sauces, apart from some small exceptions. “Boquerones”(whitebait), calamari, sausages, fritters, croquettes, potato and “torreznos”, belong to the world of fried tapas. Casserole stews as well as the Madrilenian “callos”, the Almagro’s aubergines or flavoured string beans belong to the tapas prepared with sauces. Finally, animal and agricultural-based recipes such as potato tortilla, cod fritters, croquettes and escabeches, remain obligatory at this time of the day so that, if accompanied by a salad, they could perfectly replace a complete lunch.

Today, alongside with these traditional snacks, many new ones appeared, some of which were only meant to be served on an elegantly laid table. Such newcomers include the “paella” or the stewed potatoes with meat; and others taken from foreign recipes that finally ended up in our tapas world such as smoked salmon, pate or caviar, vegetable spring rolls, smoked fish from the Northern countries, German sausages, Swiss or French melted cheese and cakes or pate from Central  Europe.

Spain is the second largest producer of wine in the world, the largest being France and the third Italy. The best known Spanish wine is probably Sherry, which is produced in Jerez. Manzanilla is a variety of fino sherry made around the port of Sanlúcar de Barrameda. In Spanish, chamomile tea is called “manzanilla”, and thus this wine gets the name because the wine’s flavour is said to be reminiscent of such tea.
The sherry is manufactured using the same methods as a fino and results in a very pale, dry liquid. In addition, the sherry is often described as having a salty flavour, believed to develop from the fact that it is manufactured on the sea estuary of the Guadalquivir river. Sanlúcar de Barrameda’s cool temperatures and high humidity contribute to a higher yield of flor yeast than in Jerez or El Puerto de Santa María. The thicker cap of flor better protects the wine from contact with the air, resulting in a fresher, more delicate flavour than other varieties of fino.

The country’s three most important red wine regions are Rioja, Ribera del Duero, and Penedes.
In Rioja, the law permits the use of four red grape varieties. Tempranillo is the primary grape used, followed by Garnacha (also known as Grenache), Graciano and Mazuelo. The latter two are excellent but difficult to grow varieties. Crianza wines are those that have been aged for two years, Reservas are aged three years, and Gran Reservas (also known as Reserva Especial) are aged at least five years.
Ribera del Duero lacks the long history of Rioja and was recognized as an official wine region in 1982, although most Spaniards would say that the best Spanish wines are produced in this region.
Penedes produces both red and white wines. The largest Spanish wine brand name, Torres, is a major producer there.

Until about 25 years ago, Spanish red wines were generally of mediocre quality. Many were aged too long in wood, overpowering their freshness and fruit character. However, quality has risen to the point that they compete successfully in the international market. Very high quality Spanish wines have recently become “trendy” in some circles.
Wine critic Robert M. Parker, Jr. has identified the following as Spain’s greatest estates: Artadi, Clos Erasmus, Alvardo Palacios, Tinto Pesquera, Dominio de Pingus, and Bodega Vega Sicilia.
Gran Corona Mas La Plata 1970 received first place in the important Cabernet blend category of the Wine Olympics.

The most valorized white wines come from Galicia (D.O. Rias Baixas and Ribeira). The most recognized of the grape varieties is the Albariño.
Another nice area for white wine is Rueda in the Valladolid province, where the most used grapes are from the Verdejo variety.

Denominación de origen is an appellation primarily for Spanish wines, but also other foodstuffs. It is closely modelled after the Italian DOC. As of 2006, 65 wine regions have DO status.
The wine appelation uses two levels of labels similar to the Italian system:

The DOCa label was introduced on 3 April, 1991. Rioja is the only appelation to hold a DOCa status.The  recognized wine producing regions in Spain grow a wide diversity of grapes, mostly of native origin. The great variety of wines with unfamiliar names causes confusion among many consumers.

The busiest restaurant in Benahavis, so we advise you to reserve a table. Traditional Spanish cooking with some international accents.
Specialities : Leg of suckling Lamb, Fresh fish every day.Probably the largest selection of top Spanish wines in Benahavis.

Great terrace in the pedestrian street and private dining rooms available, on top of  a very nice bar area.

Do reserve as the restaurant is packed more or less every day of the year.

Open all year for lunch and dinner.
Closed on Tuesdays.
Holidays : 1-31 december

This is the first restaurant you pass coming into Benahavis. On your left, above the main street, it has a great terrace, which in summer is usually full, so reserve your table.

Reknown by most villagers as being one of the best in value for money and also having a very extensive menu. All kind of meat and fish dishes and very generous portions.

A very welcoming restaurant for meat lovers with a nice atmosphere and an open flame grill where aged meat is cooked to perfection.

You will also find great dishes from the sea side, a beautiful selection of wine and one of the best terraces in the heart of Benahavis.

Suckling pig and Leg of Lamb available if ordered in advance !

Open Monday through Saturday from 19h00 till Midnight
Bar open from 18h00 till late.
Free Wifi.